In the evening of 5th August 1945, aircraft noise was heard in Selvogur. The weather was dense fog and almost zero visibility. Little later the aircraft noise was heard in Reykjavík. Apparently, the pilot was lost and was flying over the Reykjanes peninsula for two hours. At midnight the crew saw a farm Nes in Selvogur and decided to land at the cultured farmland. The space to land on was only 50-70 meters. The landing was relatively smooth. The wing hit a stack of hay and made a trench in the ground. The landing gears and the underside of the fuselage and wings sustained damage. The aircraft stopped close to a fence made of stones and lava rocks. Due to extensive damage, aircraft was written off (damaged beyond repair)
The aircraft was on military transport flight from Base Valley in Wales UK to Reykjavík. 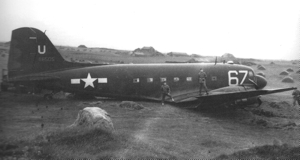