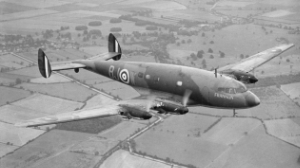 Upon landing, in Reykjavík, the landing gear collapsed and the aircraft christened “Franklin” was damaged beyond repair.

The 271 RAF Squadron, flew scheduled Postal (mail) and supply flight between England and Reykjavík Iceland.
Only seven DH 91 Albatrosses were ever built (two prototypes and five production aircraft). The prototypes were configured as long-range mail planes, while the production aircraft were built to carry 22 passengers. The passenger aircraft entered service on 2 January 1939.

At the outbreak of the Second World War, all seven Albatrosses were moved to Whitchurch airfield, Bristol, from where they operated on the routes to Shannon and Lisbon. In September 1940 the two mail planes, with their longer range, were taken over by the RAF. They were allocated to·No.271 Squadron, and used to fly between Prestwich and Reykjavik. Both of these aircraft were destroyed in crashes at Reykjavik.

Of remaining, five one was destroyed after a forced landing at Pucklechurch, Gloucestershire, in October 1940 and a second during a German air raid in December of the same year. For the next three years, the remaining aircraft continued to operate on the long-range passenger routes, until one was destroyed in a crash near Shannon in July 1943. The remaining aircraft were scrapped later in 1943 because of a lack of spares.

All five occupants were unhurt, but the aircraft was damaged beyond repair.