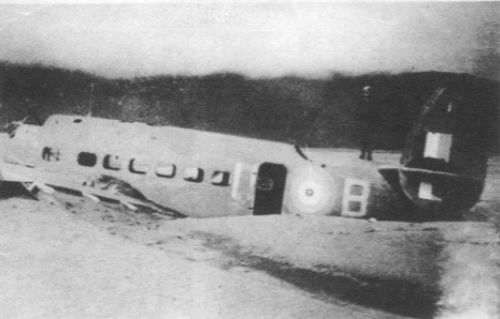 At 14.35, on the way back from convoy escort West of Iceland one engine failed and the pilot made an emergency landing at the Hraunlandarif sand beach. The aircraft was dismantled at the crash location and transported to England. UA-B was written off June 25, 1943.

My father, Robert Douglas Methven, completed his flight training and joined 269 Squadron in November 1940 with the rank of Sergeant Pilot.

After completing familiarisation with the Lockheed Hudson Mk.1 aircraft which equipped 269 Squadron he flew operationally from Wick in Scotland as 2nd Pilot with various 1st Pilots.

On April 17th 1941 he flew as 2nd Pilot with 1st Pilot Flight Lieutenant Thomson in Hudson T9425 in formation with other Hudsons to Kaldaðarnes in Iceland. He flew mainly as 2nd Pilot with various crews and various Hudsons on convoy escort and anti-submarine patrols from Kaldaðarnes.

On 1st May 1941 he was promoted to Flight Sergeant and on 23rd May flew as 2nd Pilot with Squadron Leader Devitt in Hudson T9441 searching for the German battleship ‘Bismarck’.

After his promotion he flew more and more often as 1st Pilot again on convoy escort and anti-submarine patrols from Kaldaðarnes but with occasional visits to Reykjavik airfield.

On February 12th 1942 he was 1st Pilot of Lockheed Hudson Mk.3, T9427, Code UA-B when an oil pipe fractured and the engine either seized or had to be stopped. It was discovered later that the pipe had broken due to metal fatigue. The mission had been an ice reconnaissance between Iceland and Greenland.

The aircraft was steadily losing height even after jettisoning its depth charges and anything else safely movable. I remember my father saying that the Icelandic coast is not the friendliest area to crash land and he was very relieved to see a sandy beach at Hraunlandarif where he managed land the aircraft on its belly. There were no casualties and all returned safely to Kaldaðarnes using Icelandic ponies as transport for the initial stage of the journey.

The 2nd Pilot of the aircraft was Flight Sergeant Myatt, Sammy I think, but I regret I do not know the names of the other three crew members.

My father was promoted to Pilot Officer on May 1st 1942 and continued flying Hudsons from Kaldaðarnes with 269 Squadron until August 1942 when he was posted to No.1(c) O.T.U. (No.1 (Coastal) Operational Training Unit) as an instructor on Lockheed Hudsons Mks.1 & 2.

He never returned to Iceland either during the war or after it but he always had a great regard for the country and its people. He even started to collect its postage stamps – a collection which I inherited and I continue to add to it to this day.

No. 269 Squadron RAF operated from Kaldaðarnes and Reykjavík from May 1941 to January 1944.

“stridsminjar.is” visited the crash site on July 1, 2010. No remains of the aircraft were found.
On July 13, 2015 “stridsminjar.is” located two main wheel aircraft tires at a nearby farm. The numbers and size of the tires match the data given in the Lockheed Hudson Service Manual.