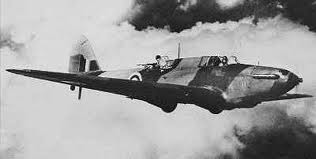 Monday, May 26, 1941, Wing Commander Arthur K, Round RAF 98 Squadron flew Fairey Battle VO-D from Kaldaðarnes to Melgerðismelar.
At noon time he took off for the return to Kaldaðarnes with his Radio Operator and two passengers. When he did not arrive in Kaldaðarnes at scheduled time, an extensive search was started. The day after 5 Battle aircraft from the RAF 98 Squadron, 2 Hudson from the RAF 269 Squadron and 1 Beaufort from RAF 22 Squadron participated in the aerial search.
The next day VO-D was found on Vaskárdalsjökull (65°26N 18°34W) on Tröllaskagi. VO-D appeared to have run into the glacier and blew up. All occupants were dead.
A letter started by Sergeant Talbot was found. No tracks in the snow leading to or from the wreck were found. The background to this tragic accident re-emerged with media coverage in 1999 of an expedition to recover the remains of the plane and investigate the site.

May 5. May 2014 an expedition from Akureyri gathered most of the plane wreck and some of these parts are on Special Display at the Flugsafn Íslands at Akureyri. www.flugsafn.is